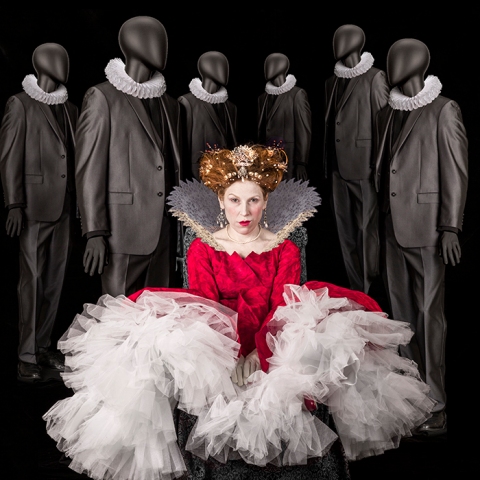 “Is it I who imitates life in images with a counterfeit family? Or are we all duplicitous in this act of fraud when we live our lives recreating templated scenes not fully our own?”— Suzanne Heintz

Suzanne Heintz, satirical artist and art director,  adopted her fake family more than than 15 years ago to challenge persisting stereotypes about women’s lives.  Just before the latest wave of contemporary feminism became headline news, Heintz hit women’s (and men’s) radars across the world on social media, and she emerged as an Internet sensation. Our documentary follows Heintz’s witty and subversive photographic crusade with mannequins – from America’s vacationland to the streets of Paris, New York and London. We are witness to candid and entertaining scenes as well as the impact Heintz’s art activism has on her real life.   In the end, Imitating Life – the audacity of Suzanne Heintz, unfolds as the ultimate race to triumph in art, identity and survival.

The self portrait of Heintz (above) – in a mash-up 1950s dress and bouffant petticoat meets Queen Elizabeth I garb, surrounded by mannequin courtiers –  is a striking example of our subject’s audacity, at the starting line of our documentary journey. There are some uncanny visual and literal parallels between Heintz and Elizabeth I, beginning with Heintz’s own identification with perhaps the most famous spinster in history.

Heintz says: “The idea is that we are self-determined women of our time, but still living in a man’s world, having to work around pre-existing acceptable roles for females. Queen Elizabeth I used politics; Lucille Ball used the business of entertainment, and I use humorous art.

“I choose each color, fabric, prop to work silently for me. The Clothing – beautiful, uncomfortable, and thoroughly ridiculous, designed to suggest how, for centuries, we have been shoe-horning ourselves to fit into the definition of Woman. I combine fashions from different eras to say that no matter the time period, the issue for female expectations remain the same. As I pose in less than royal postures, and let a few hairs loose, I speak for the less than perfect nature of a real woman, struggling against restrictive roles, while trying to do her life’s work.”

What began as a personal struggle for Heintz, to define her own role as a woman in her time, has evolved into a universal message about the pressures men and women still face – trapped by generations-old expectations to conform. Heintz’s questions about identity and traditional roles lead our cameras into a fascinating probe of her artistry, and its impact in the Internet Age. As filmmakers, we are drawn to what lies deep beneath her representation of image versus reality, and her fearless public presence.

“Elizabeth refused to surrender her power to her “place as a woman” in a man’s world.  The parallel between us was clear to me. I had to make this image so it was clear to everyone, that even today, a woman has to work around the System for her work to make a mark, ” said Heintz.